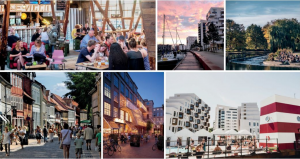 The City of Odense

Odense gained town rights more than 1.000 years ago and is therefore known as one of Denmark’s oldest cities. The city was a place of worship for the Nordic God Oden and was originally named Odins Vé. During the Viking Age, Odense had ring fortress on the banks of Odense River.

Odense River runs through the city and the Island of Funen. Its length is 54 kilometers. The river made Odense a convenient central and industrial city for many years. Today, the citizens of Odense enjoy the walking and sailing opportunities by the river. This invites guests to explore the banks of the river throughout the city.

The famous fairy tale writer H.C. Andersen was born and raised in Odense. Odense still has the atmosphere of a fairy tale city, and this inspiring city invites guests to wander its cobblestone streets with many shops, cafés, and restaurants. In the heart of Odense, you will also find many old housing styles with half-timbering, both colorful and cozy.