14.1 A Bibliometric study of the Literature of Open Science & Open Access

One of the necessary cultural changes on the way to Open Science is the commitment to its principles. Both the LIBER and LERU Roadmaps underline the importance of adopting consistent and robust practices that exemplify the benefits of Open Science. However, in the past several contradictions have been recorded, like for instance that many readers have encountered access fees on articles that discuss Open Access issues, as those were published in paywalled journals. It is important that every part of the discourse for Open Science to remain open and accessible to anyone who wishes to contribute. Therefore, gradually and steadily, a question is raised: what are the attributes of the literature about Open Access and Open Science?

In this paper, we performed a three-tiered micro-analysis study of 2390 publications that focus on Open Science and Open Access, as indexed in Web of Science, in order to see how this literature has developed over the last twenty years. Initially, we were interested in finding how many of these publications were published openly and in which version, namely green, gold or bronze. However, using the open programming language Python, we conducted analyses to further explore the landscape of this literature and we were able to find the key figures that describe its growth rate and several other statistical measures on information, like the main journal venues and authors. We also calculated statistical measures of the types of these publications and whether they were financially supported or not. In the second tier of our analysis, we produced timelines that reflect the temporal progress of authors, journals and descriptors, starting from a time point shortly after the Santa Fe Declaration of Open Access. Finally, in the third tier, we produced networks of entities and performed analyses to identify the main authorship models, which together with other indicators, show if collaboration fosters in this literature and how its main entities are linked together. The study offers a thorough and detailed view on the bibliometric aspects of the “Open” literature conducted by open, transparent and reproducible tools. 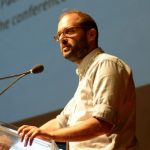 Giannis Tsakonas holds a BA in Librarianship from the Department of  Archives and Library Sciences, Ionian University, Greece and a PhD in Information Science from the same Department. Currently, he works as  Acting Director in the Library & Information Center, University of Patras, Greece. In the past he has worked in the frame of numerous projects concerning the development of digital libraries, while he has served the Program Committee of many national and international conferences. He is member of the Editorial Boards of the International Journal on Digital Libraries and member of the Steering Committee of the Theory & Practice on Digital Libraries Conference. Since July 2016, he is member of the Executive Board of LIBER (Ligue des Bibliothèques Européennes de Recherche – Association of European Research Libraries), while since July 2018 he has been appointed Chair of the Steering Committee on Innovative Scholarly Communication. Since July 2016 he has been elected to the Board of Directors of Hellenic Academic Libraries Link and on December 2016 he was appointed Vice President of the Hellenic General Council of Libraries, a body of the Ministry of Education, Research and Religious Affairs monitoring the operation of Greek public libraries.

14.2 Building and Funding Bibliodiversity: 1 Year After the Launchof the French Open Science Plan

From October 2017 to July 2018, a series of declarations and decisions profoundly changed the French open science landscape. The launch of the Jussieu Call for Open Science and Bibliodiversity was followed by the establishment in spring 2018 of a French Committee for Open Science (CoSO) bringing together researchers, public publishers and librarians. Finally, at the LIBER congress in Lille, on July 4th, 2018, HER Minister Frédérique Vidal presented the French National Plan for Open Science.

One year later, the contribution aims at presenting a progress report on achievements in strengthening bibliodiversity and setting up a National Open Science Fund, two of the objectives of the Plan.

At the national level, the reflection was carried out between September 2018 and June 2019 within the CoSO by a working group of 40 people including 20 researchers. Five complementary aspects were taken into account:

At the institutional level, several initiatives have made it possible to initiate greater financial support for open science initiatives. Libraries have very often played a key role in this.

The presentation will be based on the final state of work and reflections of the CoSO working group as well as on several case studies of institutional engagement. In particular, it will address the following three points:

Jean François Lutz has been in charge of the digital library of Université de Lorraine since 2012. He is a former student of the Ecole Nationale des Chartes and of the National Superior School of Information Science and Libraries (ENSSIB). He has been involved in the open access movement for 15 years and was board member of the Couperin consortium (2006-2012) and Sparc Europe (2008-2014). He contributed to the drafting of the Jussieu Call for Open science and Bibliodiversity and is now member of the French Scientific publishing monitoring committee and of the national Open Science Committee (CoSO).

14.3 Open Science and the Data Stewardship Programme at Delft University of Technology

The principles of Open Science allow for rapid dissemination of knowledge, stimulate collaboration, and improve the reproducibility and quality of research. The transition to Open Science is an endeavour in which researchers require assistance.

Delft University of Technology (TU Delft) in the Netherlands offers support in the form of policies and guidelines which facilitate the transition to Open Science. The Strategic Framework 2018-2024 of the TU Delft, entitled “Impact for a better society”, lists “openness” as one of the four major guiding principles. TU Delft has an Open Access Policy in place since 2016 and a Research Data Policy Framework since 2018. The TU Delft Library collaborates with the faculties of the university, IT support, as well as the valorisation and legal team to support researchers that have to adhere to these policies.

Researchers are also supported by the TU Delft Library which provides Open Science guides and workshops/courses, as well as an Open Access fund to pay for the costs of publications in journals registered in the Directory of Open Access Journals (DOAJ). Alternatively, researchers can make use of the TU Delft Open publishing platform, which publishes research Open Access. TU Delft also hosts an Open Access Data Archive, ‘4TU.ResearchData’ and is a founding member of DataCite. In 2018 TU Delft launched a MOOC called ‘Open Science: Sharing Your Research with the World’. The Data Stewards inform researchers about these Open Science developments and encourage the use of the facilities that TU Delft offers.

The Data Stewardship programme and Open Science facilities at the TU Delft are used as a case study to illustrate the challenges and opportunities that libraries face in the transition to Open Science at research institutions. 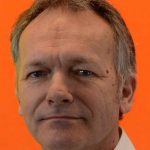 At present he also chairs a multidisciplinary team that develops a new program on Open Science for Delft University of Technology.

Before entering the exciting world of Libraries and information management he was occupied in Science Museums, the history of science and science education.